Your ship is the way to cross the Caribbean. Here are the basics of mastering ships:

The Naval Action damage model simulates the behavior of a sailship fairly accurately. The panel above shows the basic damage taken by your ship: 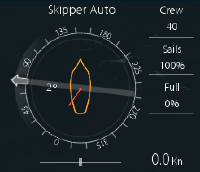 Of course, the same applies to enemy ships. Destroy the rudder and they'll find it difficult to maneuver. Damage the sails to catch up with them. Kill the crew to capture the ship, either by decrewing it completely or boarding it.

The ship can be set into four separate modes in combat, including: